In the last issue we wrote about BOMA International’s Winter Business Meeting & National Issues Conference that took place in Washington, D.C. In this issue we featured Advocacy Day at the Statehouse in Columbus. Those are excellent examples of annual events that BOMA, as an organization, puts on and showcases our expertise in commercial real estate. At this point we do not have a Greater Cleveland or “local” Advocacy Day – but putting together some sort of organized event to reach out to area elected officials is indeed a short term goal. Our local advocacy efforts are generally more informal and involve targeted meetings with members of Cleveland’s City Council or the Cuyahoga County Council. 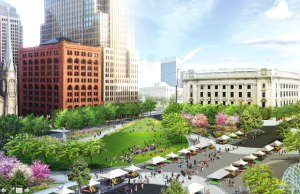 Rendering of what Public Square may look like in the future. Photo courtesy of Cleveland.comAs we have mentioned in the past, there is still a good amount of development taking place in and around downtown Cleveland. The most high profile project that has the potential to drastically alter traffic patterns is the proposal to give Public Square a makeover. At present, the plans are to close Ontario Street through the Square completely to vehicles and limit Superior Avenue through the Square to only buses. Theoretically, Roadway and Rockwell Avenue around the Square would then be converted to what would essentially be a roundabout. Our Board of Directors will continue to monitor any potential access issues that may arise for downtown office buildings and updates will be provided to our members as the information comes in. Be sure to follow us on our social media pages for the latest!